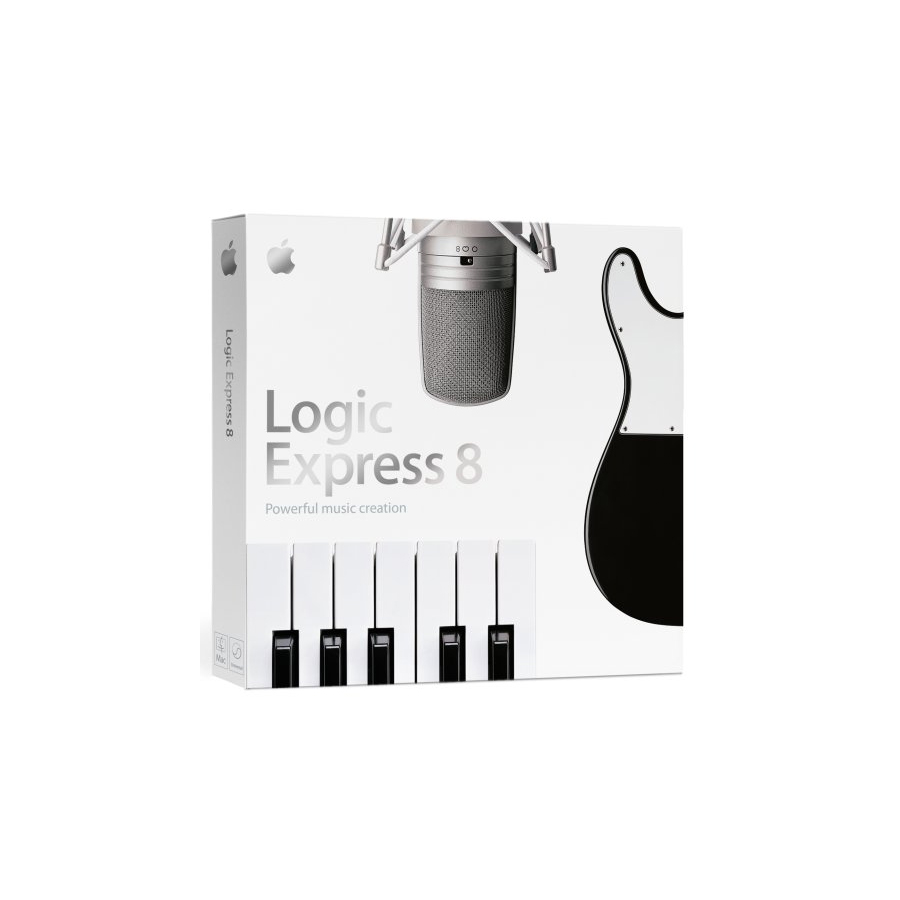 Logic Express 8 comes with an expanded collection of professional instrument and effect plug-ins from Logic Studio, as well as channel strip settings and plug-in settings that allow you to begin making music immediately with professionally designed sounds. Logic Express is the ideal application for professional musicians and producers who want to get into the world of Logic for $199, as well as GarageBand users who are ready to take their music to the next level.

A World of Options
Logic Express puts a world of creative options at your fingertips, thanks to an open architecture that lets you use a wide range of audio interfaces and many different control surfaces. You can also explore hundreds of third-party Audio Units instruments and effects and incorporate sounds from third-party applications such as Ableton Live and Propellerhead Reason. Logic Express lets you work anywhere at any time, without proprietary hardware. When inspiration strikes, all you need is Logic Express and a Mac to capture your ideas and turn them into music—at home, on the road, or in the studio.


New in Logic Express 8
Logic Express 8, Apple's professional music production application, provides musicians with the powerful, easy-to-use tools they need to write, record, edit, and mix. It features an interface that has been redesigned for fast, intuitive control, with all the key functions organized in a unified workspace. Time-saving recording and editing tools make Logic Express 8 perfectly suited for everything from a scratch recording to a symphonic 24-channel recording.

New features in Logic Express 8 include:

Effortless Multitake Recording
Logic Express 8 offers a simple, flexible approach to multitake recording. When you record over existing material, your takes are automatically stored in a take folder. Expand your take folder at any time to see a graphical display of all your takes for easy auditioning and editing. You can move a take folder anywhere in your arrangement and edit it just as you would any other region.

Revolutionary Quick Swipe Comping
Quick Swipe comping dramatically streamlines the process of comping tracks. Rather than cutting, moving, and muting regions, all you have to do is click and drag to select the best sections of each take. This creates a perfectly seamless comp, complete with transition-smoothing crossfades.

Makes it easier than ever to translate musical inspiration into professional productions
Includes all the functionality of Logic Pro 8 except for four high-end professional features--surround, TDM/DAE support, distributed audio processing (DAP), and support for high-end control surfaces
36 instruments from Logic Studio, including Ultrabeat drum machine, EXS24 Sampler, and ES2 synth
70 effects from Logic Studio, including Guitar Amp Pro, Ringshifter, and full-featured Pitch Correction
Hundreds of channel strip settings and thousands of royalty-free Apple Loops so you can make incredible-sounding music right out of the box

Network-Based Save and ShareBack up personal channel strip settings, plug-in settings, and key commands to your .Mac account for easy access from any computer connected to the Internet.2 You can also select favorite settings to share across a local or Internet-based network or through your .Mac Public folder.

New Effects from Logic Studio
With more than 70 professional effects, Logic Express gives you a rich palette of options for creating unique sounds—including a number of high-quality effect plug-ins from Logic Studio.

Built-in media browsers give you intuitive, rapid access to your content without opening additional windows or leaving the workspace.

Additional Features in Logic Express 8
Logic Express 8 is a sophisticated, full-featured audio and MIDI application that provides all the tools you need to create professional-quality music productions. It allows you to record and edit audio and MIDI, add high-quality effects, and mix your music. The final mix can be exported to one or more standard audio files or burned to an audio CD. Logic Express 8 offers a broad and deep feature set in a redesigned single-window workspace.

Ultimate Writing Studio
A professional collection of music creation and writing tools makes it easy to capture and develop your musical inspirations. Record multiple takes, quickly assemble the perfect comp, establish a groove with a selection of Apple Loops, and fill out the remaining parts in your composition with Studio Instruments.

Multitrack Recording
You can use Logic Express 8 to record anything from a quick demo to a large-scale commercial project. One-step track setup lets you create and record-enable multiple tracks with ease.

Precision Editing
Audio editing features in Logic Express 8 let you work with power and precision, using sample-accurate tools in the Sample Editor or directly in the Arrange window.

Professional Mixing
Complete your project with powerful mixing and automation tools that meet the demands of any size production. 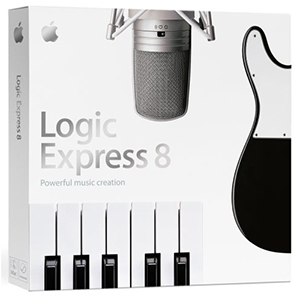